Battling Third For Rea In Donington Race One 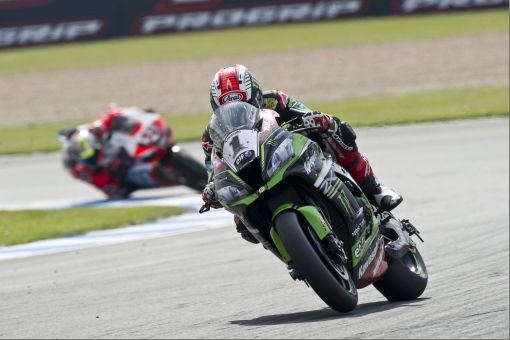 Starting from fourth place on the grid Rea rode hard in the opening laps and was up to second by lap seven when he ran on, for the first time, after finding a false neutral.

Pushing hard to catch the leaders, Rea began to lose some grip from the rear tyre and also continued to experience gear shift problems, pushing him wide and off the track in the tight hairpin corners at the end of the lap.

By the chequered flag he would be 9.808 seconds down to come home in third place.

The closest championship challenger Chaz Davies (Ducati) crashed out of the race in the closing stages. This now leaves Rea with a 58 point series lead as he approaches tomorrow’s second day of Donington race action.

The second Donington 23-lap race is scheduled for 15.00 local UK time on Sunday 29th May.

Jonathan Rea stated: “My bike felt really good in the beginning of the race but near the end I started to lose some grip from the rear and suffered a little bit turning into the corners. I found neutral five times in the race and two times at the final corner I ran onto the gravel, and then had to turn around on the access road. Also in the Melbourne loop I used all of the track surface just to stay on the track. It was affecting my confidence a little bit so I started to roll of the gas and make sure I did not make any more mistakes. It is frustrating for me because at some points of the race I could see my pace was even faster than the front two guys. I was closing in on them after my first mistake. I consolidated my podium so I am happy for that but a bit frustrated that we could not fight at least Tom and Davide at the front at the end of the race.”