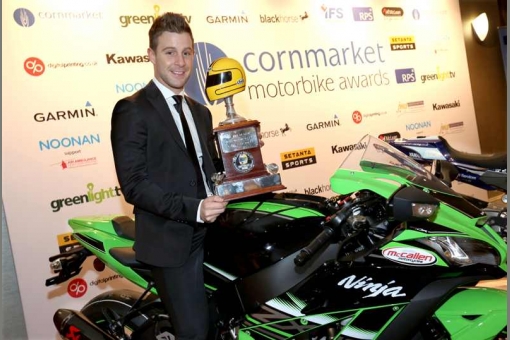 Jonathan Rea will start the final two-days of European winter testing at Motorland Aragon on Wednesday 3rd February, one week before the official team launch of the all-new Ninja ZX-10R in full race colours. After that public unveiling 2015 champion Jonathan Rea and team-mate, 2013 champion, Tom Sykes will head to Phillip Island in Australia for the first of the 14 scheduled rounds in the 2016 season.

The Kawasaki Racing Team tested the 2016 Ninja ZX-10R at Motorland in November last year as well as the most recent tests at Jerez, so they arrive at this test with lot of knowledge of the race machine.  These coming days will be used by Rea and his crew to make final evaluations before everything is packed and shipped to Australia for the first races of the season.

Rea arrives at these test after picking up yet more awards last weekend.  It was a rousing home-coming for the 2015 World Champion at the Irish Racer Awards held in Belfast where he received the Black Horse Short Circuit Rider of the Year award along with the prestigious Joey Dunlop Trophy as Irish Motorcyclist of the Year.

The serious business of defending the World Championship beckons, however.  After the coming two days there will be one final test at the Phillip Island circuit on 22nd and 23rd February before the race weekend starts in earnest on Friday 26th February.  This season will see a change to the format of race weekend for the WorldSBK Championship.  There will be one race on Saturday with race two coming on Sunday afternoon.

“It was great to win the Joey Dunlop Trophy.  I had to apologise when I made my speech as I haven’t been feeling to good and was losing my voice but I had a really good night and got a great reception from everyone.” said Rea of the ceremony.  Looking ahead to the test he said,  “It is always difficult at Aragon because the weather and temperatures can be unpredictable but it looks like the next few days will be ok and the track temperatures should be fine.  That will give us a good amount of track time to get to know more about the new engine characteristics.  There are a few things that we still want to try but it is also a chance to reaffirm the base settings that we found in Jerez at the last two tests.  If I feel good I will try and do a race distance on the second day and see where we are.  After this test we have the team presentation in Barcelona and then I head straight to Australia.  I am looking forward to seeing my family of course but I am also ready to get the season started and get stable conditions so we can focus in on a race weekend.”