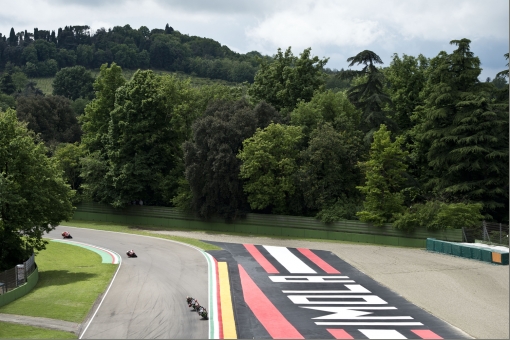 Jonathan Rea and his KRT team-mate Tom Sykes stood on the podium for the second time in two days at Imola, with Rea once more second and Sykes again a close third on their all-new Ninja ZX-10Rs. Chaz Davies (Ducati) took victory again in race two. Jonathan now has a championship lead of 35 points.

Rea and Sykes rode in tandem at times in the second race of the Imola weekend, which was finally held in dry conditions after heavy overnight rain. Neither KRT rider could get into contention with double race winner Davies today, despite each making changes for the second race that indicated a positive direction in overall set-up.

Jonathan had to overcome an issue with his electronics cutting out and also almost falling as he ran wide when exiting the slow final chicane in his early pursuit of Davies.

For Rea his two runner-up places keep him in a clear championship lead, 35 points ahead of Davies. Jonathan also maintained his 100% podium record today, having scored ten from ten (including five wins) as he defends his reigning champion status. Rea has now scored 75 podiums in his WorldSBK career.

The next round of the championship takes place at the Sepang International Circuit in Malaysia, with racedays on May 14 and 15.

Jonathan Rea stated: “Chaz made a very good first lap and broke me a little bit but then I felt like I was managing the same pace and maybe even faster. Then I had a huge moment on the exit of the last chicane. I ran onto the Astroturf, which had held moisture from last night’s rain. A few laps later, when I was in fifth gear and on full gas, my bike just cut out on the straight. I lost two or three seconds in one lap. It fired into life again but it took me a few corners to relax again. It feels like when we can’t win we should finish second and we did that at Imola. It is clear now that there are three guys now at the top of the championship. Every dog has his day and today was not ours.”