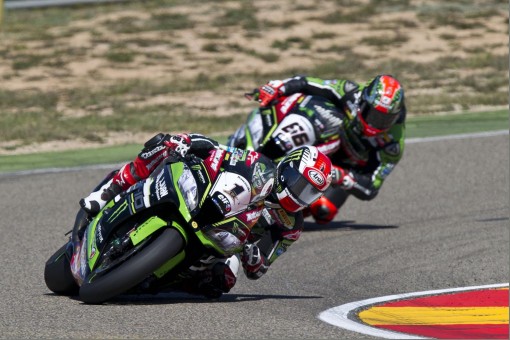 Jonathan Rea and the Kawasaki Racing Team head to the TT Circuit Assen in Netherlands this weekend for the fourth round of the FIM Superbike World Championship.  Rea comes into this event at the head of the series standings with a 26 point lead over Chaz Davies (Ducati) having won three of the last six races.

Assen is a circuit where Rea enjoys racing and, with seven wins in the past, is the second most successful rider in WorldSBK history at the Dutch track behind Carl Fogarty. Last year he took a double win on the Ninja ZX-10R ahead of championship rival Davies and local hero Michael van der Mark (Honda).

Last time out at Motorland Aragon, Rea and team-mate Tom Sykes were once again on the podium taking a second and a third place each in the two races, behind Davies.  Sykes himself is a previous winner at Assen and Jonathan expects these rivals to once again provide the challenge this weekend.

Motorcycle racing has taken place at the current location, south of the town of Assen, since 1926.  In those days the Dutch TT took place on a 16.5km track. Over the years the circuit has been modified and shortened to it’s current 4.542km layout but is still one the most popular venues for motorcycle racing amongst riders, teams and fans alike.

Laid out over a flat site and devoid of real elevation changes, the unique elements of Assen include heavy positive cambers on many of the fast corners and sweepers, plus the much slower final ‘Geert Timmer’ chicane. This as been the scene of a vast number of last lap incidents and dramatic passes over the years, all of which has led to Assen having an almost mythological status, being known as the ‘Cathedral’ of Motorcycle racing

Track action will begin for the WorldSBK category at 10:15 (GMT +2) on Friday morning for a one hour Free Practice session, repeated in the afternoon at 13:30.  Superpole qualifying will begin at 10:30 on Saturday morning, race one will take place at 13:00 the same day and race two will start at the same time on Sunday.

Jonathan Rea stated: “Assen is a good circuit for me and our bike works quite well there. We learned many things in Motorland Aragon during round three, mostly that the base set-up we found with the previous bike worked quite well with the new bike.  Hopefully the weather can be consistent throughout the weekend at Assen so we can build a rhythm and some consistency in our package - and with my riding as well. We did a good job in Motorland but we need to start getting back to winning ways again. We could be in for a great season especially as we are entering Assen, a track I enjoy racing at. I have no idea why I go so well there but I really enjoy the place. It is a real riders track that - when your bike set-up is not working just perfectly - you can still make a difference.  There are a lot of corners there that require different techniques than just the finding the brake point, apex and exit. There is quite a lot of technique to Assen. I also think it is just experience of the track.”