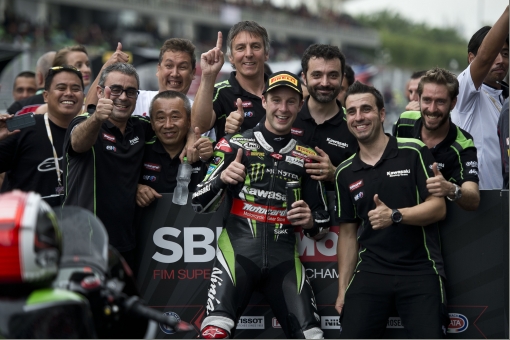 With no previous wet experience to call on at the resurfaced Sepang circuit the official Kawasaki Ninja ZX-10R rider had little time to find a good set-up on full wet tyres. Starting from third place Jonathan made a good launch from the startline in search of more podium success.

Rea led early on but was passed by Hayden before the end of the first lap.  He was then able to hold onto a good pace for most of the race, changing places with Ducati pairing Giugliano and Chaz Davies, even fighting back in the later stages to reclaim third place and a podium from his nearest championship rival Davies. In doing so he managed to keep his points total moving ahead once again and he now has 257 points to Davies’ 215, after six rounds.

The next round will be held at Donington Park in the UK, over the weekend of 27-29 May.

Jonathan Rea stated: “It is so difficult in a weekend when you have all dry sessions, a dry race one - and then two hours before race two a monsoon comes in! I am proud of my team because they were so reactive to the changing conditions. I feel we got it quite close and my bike was giving me quite a lot of feedback out there. The strategy in the wet was just to do the rhythm. It was important to keep the corner entry traction off the tyre, as normally that is the first area that suffers. So when I set off it was just about managing everything. Nicky was too far in front for me to want to really grit my teeth and go for him. I was happy with our performance and that was the maximum we could do. Maybe if I had the race again I could have gone with Nicky in the beginning but third was the result we got today and we achieved our target for the weekend. That was to increase our championship lead, so I am happy we did that.”