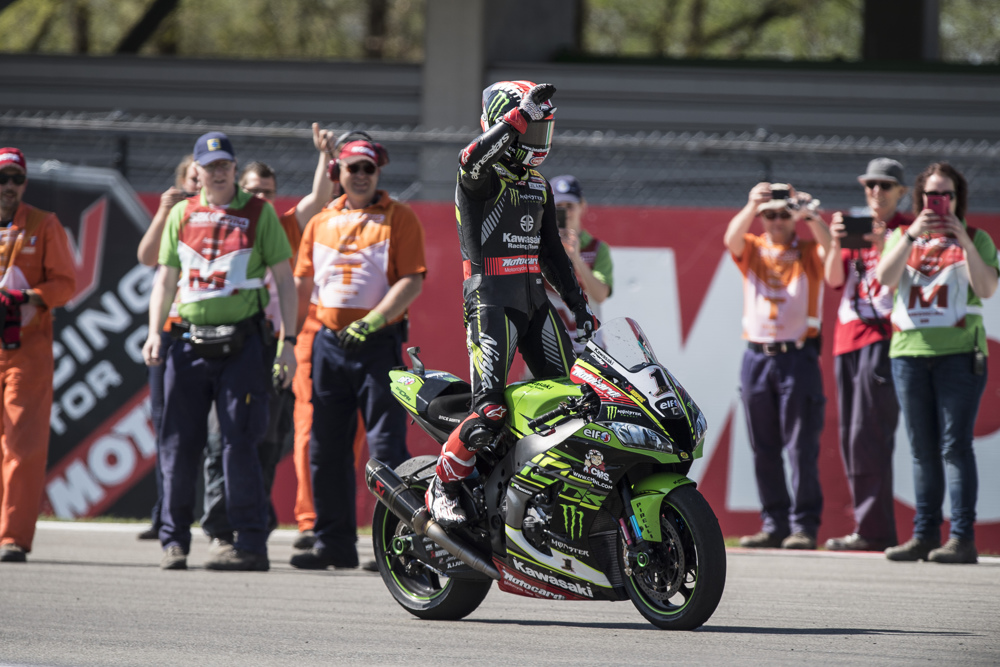 In uncharacteristically warm and dry conditions, which blessed both opening days of the Assen WorldSBK weekend, Jonathan Rea showed his affinity with the historic Assen circuit by leading across the line for all but two laps. He was to win the race by an eventual 0.981 seconds from local man Michael van der Mark (Yamaha), who led for two laps, and Chaz Davies (Ducati).

Jonathan’s third race victory of the year came after some good work in practice and qualifying, and being able to improve the pace in warm conditions, making a gap that he could control in the final few laps of the 4.542km long circuit.

Rea’s win was his third of the season and takes him to within two victories of the outright record of 59, held by family friend Carl Fogarty. This was Jonathan’s 75th podium for Kawasaki. He is now the second rider, in his own right, in terms of career podiums, with 117.

With race one completed the KRT riders will take part in race two at Assen, on Sunday 22ndApril, at 13.00.

Jonathan Rea, stated: “I enjoyed that race. I had two or three small attempts to break the group but it just wasn’t happening. I preferred to be at the front of the race anyway, to manage things in the places I was strong. I knocked back a little bit in case I was not able to make a gap in the last laps. I think with four to go I started to make a couple of strong lap times and that just broke the gap to the others. I was quite lucky because on the last lap I made a little mistake at T8 but by that stage I had already made the gap. I was super-happy because we arrived here with the bike that was quite strong at the start. With consistent weather on Friday I was able to do two race simulations to understand how the tyres would be at the end today.”