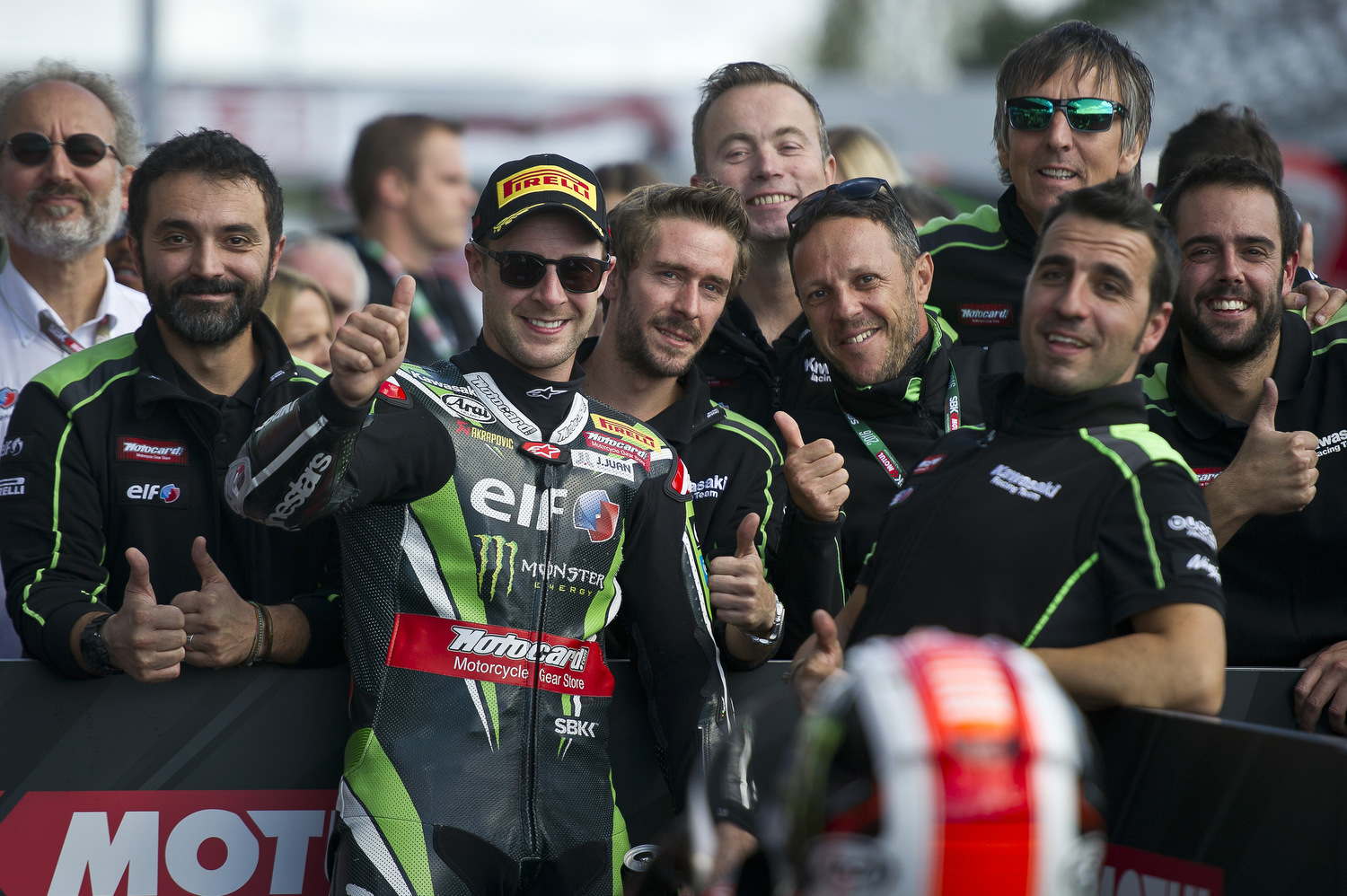 Jonathan Rea finished on the podium in the second 21-lap FIM Superbike World Championship race at Magny Cours, behind Chaz Davies (Ducati) but ahead of Kawasaki team-mate Tom Sykes. Rea has extended his championship lead over his team-mate to 48 points.

Rea was looking to re-assert his championship lead after yesterday’s fourth place in the wet and dry race that saw his advantage over Sykes and Davies shrink.  Once more he led off the line but Sykes was again strong in the early laps taking the lead during the first lap.

The conditions of race two could not have been more different from the wet and drying track encountered on Saturday. The dry surface allowed Sykes to post a new lap record of 1m 37.864 seconds, on lap three, as tried to establish a lead.  Rea however, was never far behind, marking his team-mate as the race progressed.

The undulations and heavy braking areas of the 4.411km Magny Cours circuit provided many passing opportunities for Rea, but Sykes proved determined to hold onto his lead. He only surrendered it on lap 16 – temporarily to Rea and then finally to Davies. Rea re-passed Sykes with four laps to go and set about trying to reel in Davies. Rea had lost too much ground by that stage but still scored his first podium of the weekend in second place.

Rea has now scored 84 podium places during his career and in the current championship standings, Rea has 426 points, Sykes 378 and Davies 345.

The next races in the championship will take place on Saturday 15th and Sunday 16th October, at Jerez in Spain. The last round will be held at the Losail Circuit in Qatar, between 28th and 30th October.

Jonathan Rea, stated: “I tried to plan my pass on Tom because he is strong right now and he is hard to pass at the best of times. When I overtook under braking, unfortunately it let Chaz come past us. Then I had to try to pass Tom again but already the gap to Chaz was too much. Maybe I spent too much time behind Tom but he is riding so well. I am happy with my race because, today, second place was the best I could do and I am happy with the way I rode. We need to improve the bike set-up in some areas but all things considered I am happy with the result. It is a 48-point gap now and it is nice to extend the championship lead, if by one point after Lausitzring last time and by another single point here! Championships can be won by a point so every one of them is important. If we can just have a clean end to the season hopefully we can do the job.”