Rea Makes It A Hat Trick Of Victories In Thailand 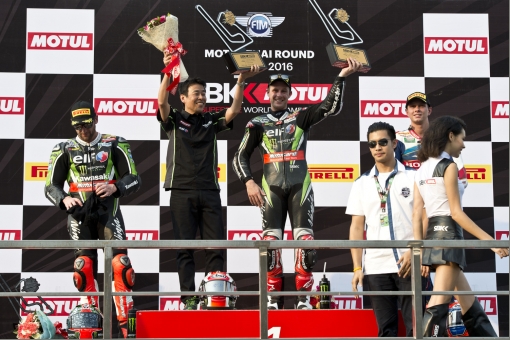 With high air temperatures of 34°C during the race at the 4.554km long circuit it proved physically hard work for all, but it was the KRT pairing who held the advantage after all the laps had been completed.  Rea had led off the line but was passed by Sykes early in the race.  With a few laps remaining Rea managed to take back the lead and held on by the slimmest of margins to continue the perfect start to his title defence.

Despite the slippery track surface in some areas, causing the riders to take unusual lines at those points, Rea’s race time was better than his equivalent 2015 season win. He set the fastest lap of the race on lap 14, as he chased down Sykes.

Both Kawasaki riders feel that there are even more improvements to come from their Ninja ZX-10R machines over race distance for race two tomorrow.  The race will take place at the same time 16:00 (GMT +7).

Jonathan Rea stated: “The pace was fast; I did not expect it to be so fast as all weekend we have been slower than last year. So it was a good, fast race. I put my head down and with four laps to go I got a small gap of about 0.7 or 0.8 seconds on Tom. On the final laps I got caught out in the first turn by another rider but it was not so much. I had done all my work by then as I had completely emptied my tank with about four laps to go to try and get away. I am a little bit tired now because I went full gas in those last four laps. We were able to capitalise on that work and I feel like I rode for a stronger win than I have had for a long time. Tomorrow, I expect my bike set-up will be much stronger.”