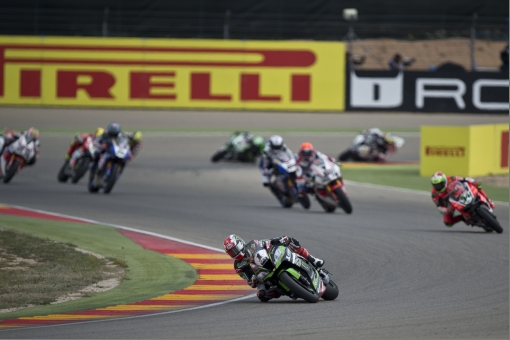 In the second race of the FIM Superbike World Championship weekend at Motorland Aragon Jonathan Rea once more finished on the podium, this time in third place, behind team-mate Tom Sykes and Chaz Davies (Ducati). The official Ninja ZX-10R rider retains his lead in the championship from Davies with Sykes now back in third.

From pole position Sykes attacked the lead of race two and held his strong pace even after eventual race winner Chaz Davies had passed him on the second lap. Rea eventually passed Sykes as the race reached the closing laps. However, on lap 15 Jonathan ran wide and lost time and track position. He had been pushing hard throughout race two but after rejoining he could not regain ground on his team-mate and had to settle for third place.

Set-up changes from day one to day two did not have the full desired effect and grip issues did not help his cause in the final result of the second race of the weekend.

In the current championship rankings Jonathan still enjoys a clear lead, some 26 points ahead of Davies. Sykes, in third, is 29 points from Jonathan after three rounds and six races have been completed.

The next round is at Assen in the Netherlands, with races on Saturday 16th and Sunday 17th April.

Jonathan Rea stated: “It was a difficult race because straight from the off we did not have so much grip in the rear and I was having to pick the bike up. When I back-shifted going into turn one with a few laps to go the rear locked and I could not stop, that was end of the chance to fight for 2º today. Being second or third today is not the issue it is being so far from the fight for the front. There were some areas where we were struggling today. We just need more time with the new bike and it is a step-by-step process. When a tough weekend is second and third it is not so bad!”