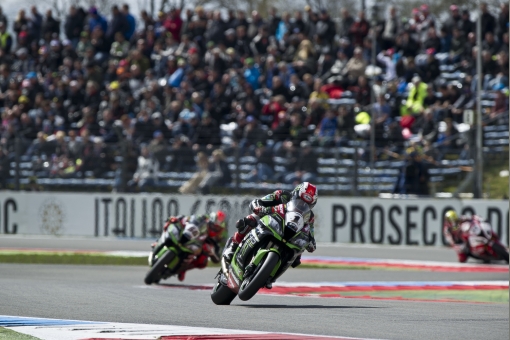 Jonathan Rea took another victory today in the second 21-lap FIM World Superbike Championship race at Assen, making it a consecutive double win with the Ninja ZX-10R at the Dutch circuit.  In a race that started wet, Rea and his Kawasaki team chose the perfect strategy and, after making a pit stop to change tyres, he led the field home with team-mate Tom Sykes second and Michael Van Der Mark (Honda) in third.

At the start of the race, in fully wet track conditions, Sykes took the lead from his pole position grid placing with Rea running in fifth place after the first lap.  With riders adapting to the drying track conditions Rea briefly led the race on lap eight before entering the pits for a tyre change.  That put him down to 14th place but over the next few laps, as the grip levels improved and most of the riders ahead pitted to change tyres Rea rapidly moved through the field.

With Sykes closing in, Rea took over the lead of the race on lap 14.  However, his team-mate had made a different tyre choice and in the end Rea took victory by 2.442 seconds.  This was his second double race win and fifth of the season so far, extending his Championship lead to 45 points over closest rival, Chaz Davies (Duacti), who finished fifth today.

The series now moves to another happy hunting ground for Jonathan at Imola in Italy, over the weekend of 29th April – 1st May.

Jonathan Rea stated: “Our target this weekend was to increase our championship lead and we did that. I said to Pere my crew chief before the start of the race that the track should dry out pretty fast. We have had previous experiences like that. I have no idea why I go so well at Assen. It is nothing to do with the track itself. We got a double victory but it was not like Australia where I had more pace than the rest. We controlled the situations this weekend when we had to, we were calm and clever when we had to be, and as a team our strength shone through to get two strong results. We got the maximum from what we could achieve here so I am super, super, happy with that. Our stars aligned this weekend and it worked out, so I am just happy.”