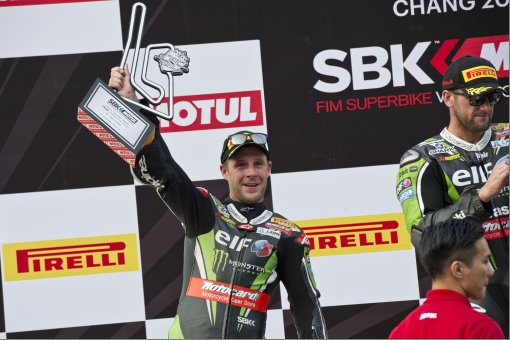 Another electrifying 20-lap race saw Jonathan Rea secure a podium place behind Kawasaki team-mate Tom Sykes in the second race of Round two of the FIM Superbike World Championship in Thailand. Sykes took his first race win of the year on the all-new Ninja ZX-10R, with Rea just 0.190 seconds behind at the flag. Chaz Davies (Ducati) finished a very close third behind the Kawasaki duo. Rea leaves Thailand with 95 points and the series lead.

The weekend at the Chang International Circuit will go down as a double 1-2 event for Kawasaki with Rea winning race one on Saturday from Sykes, and that order being overturned after a combative contest around the 4.554km circuit in the heat of the afternoon on Sunday 13th March.

Rea set the fastest lap of the Sunday race, on lap five, as he chased early leader Sykes.  The pair looked to have the race between them for most of the race distance but Chaz Davies arrived towards the end and made the battle for the podium places even more complicated.

The second 1-2 in two days for Kawasaki’s official entrants also gives the KRT riders a 1-2 in the championship, with Rea in the lead by 29 points and Sykes a point clear of Michael van Der Mark (Honda) after four races.

Kawasaki riders have won all of the 2016 season races so far, making a perfect total of 100 points in the Manufacturers’ Championship. Yesterday Jonathan Rea moved to a lone fifth in the all-time race winners’ tally, with 32 career wins.

The KRT squad’s European home base in Spain is where the championship will relocate for the next round, at the magnificent Motorland Aragon circuit. Race weekend will be held between 1st and 3rd April.

Jonathan Rea stated: “We made a small improvement today in the bike set-up and from ten laps to go I had a much higher pace than Tom. I really wanted to win and I tried two or three times but to win a race against Tom when he is strong, and defending very well, you have to go really deep. Massive credit to him; he did a good job today and beat us flat out. It is good for Kawasaki to have a 1-2 although I would prefer to be the guy in front. Fair play to Tom because I was over my head to win the race yesterday but today I tried my best and got beat. I am sure it was a nice show to watch. We increased our championship lead from Phillip Island and it has been a good day, but I just wanted to win the race. To get beaten is really great for my motivation.”