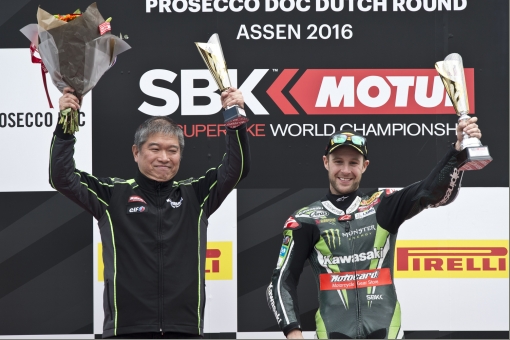 Rea had started well from his second row qualifying position after finishing this morning’s Superpole contest just one place from a front row start. With significant changes to his machine’s set-up for the dry first race, after a fully wet Friday in qualifying, Rea put himself in position to win on raceday.

It was a hard fought race where the lead changed hands several times.  Rea’s team-mate Sykes led at the start but soon dropped behind Rea and Davies and into the clutches of the Honda pairing of Michael Va Der Mark and Nicky Hayden, forming a group of five that swapped places throughout the race.  Both Sykes and Van Der Mark would crash out whilst Rea took over the lead from Davies in the last few laps to come home and record his fourth win of the season.

In giving the 2016 model Ninja ZX-10R its latest race win Rea extended his championship lead to 31 points, from Davies. With one more WorldSBK race to come on Sunday 17th Rea has another chance to go for a win at the classic Dutch venue.

Jonathan Rea stated: “It was great to win another Assen race. Our bike set-up was new because we changed the bike just for the race after warm-up. I put my head down with a few laps to go. It is really hard to lead but I was so-so happy because I feel we have been a bit on the back foot now since Aragon and before so to score 25 points here is great. I think the potential of this bike is huge but I have yet to get it into a really good window I am comfortable with. This race has given us a lot of information and to score 25 points when it really matters is incredible for me, for my strength inside, and for my championship. I want to thank all the Dutch fans because they give me a great reception every time we come here and thanks to my team for their hard work and keeping my spirits up. After Aragon I felt we were a bit deep in the sea and now I feel our heads are above water.”