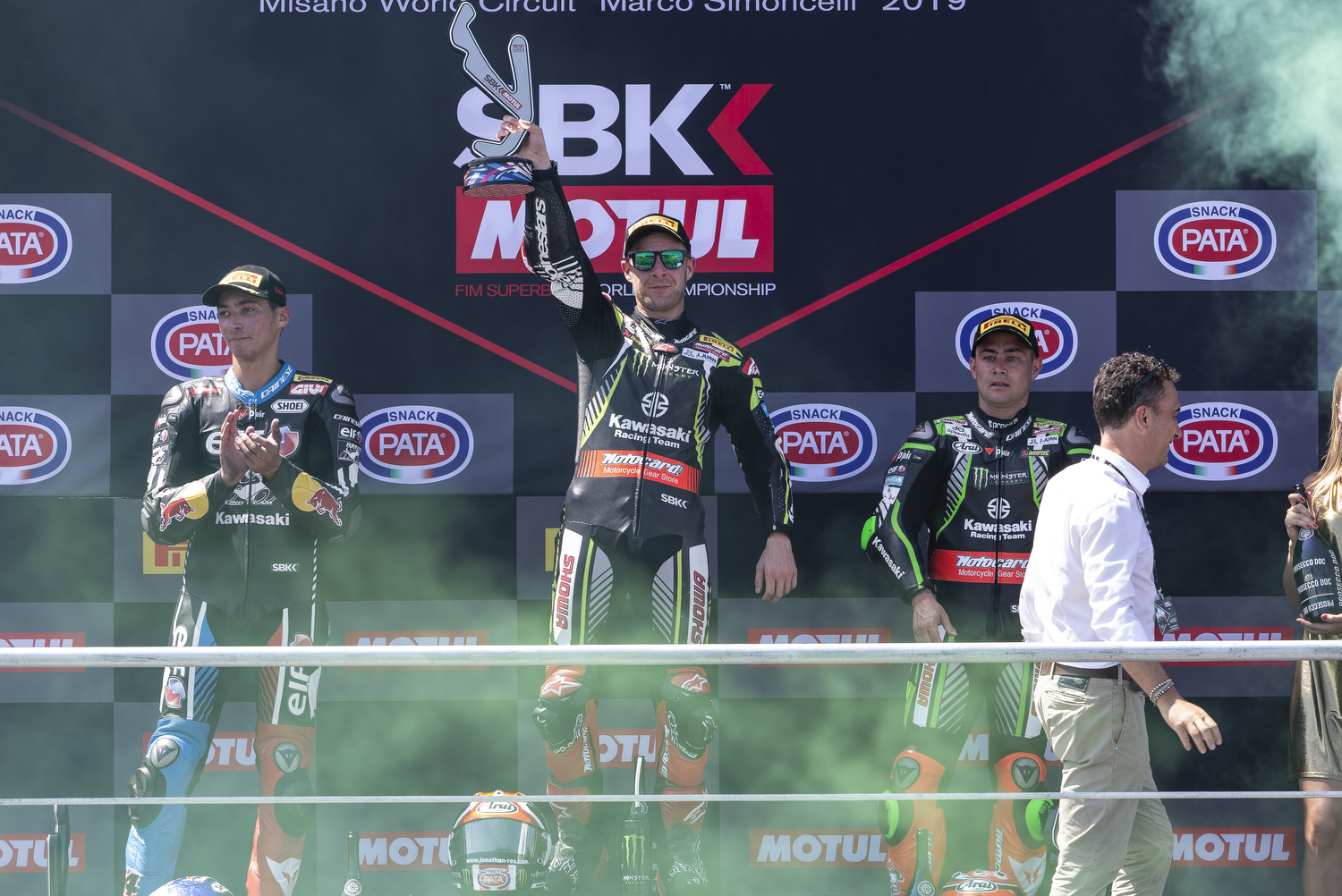 Jonathan Rea won WorldSBK race two at Misano World Circuit today, 10 years after he took his first ever WorldSBK career win at the Italian circuit on the Adriatic coast.  He was joined on the podium today by Puccetti Racing Kawasaki rider Toprak Razgatlioglu and KRT team-mate Leon Haslam in second and third respectively. Razgatlioglu and Haslam will team up with JR later in the summer as the Kawasaki Racing Team for the prestigious Suzuka 8Hr race.

Today’s race two win came after the Tissot Superpole race which took place earlier in the day.  Jonathan started the ten lap sprint race from pole position and was running in second place when he fell with a few laps remaining.  He remounted and battled on to finish fifth.

Starting from fifth on the grid JR pushed through to the third after the first lap and when pole sitter for race two, Alvaro Bautista crashed on the second lap he was then in a battle with his team mate Haslam and Razgatlioglu.  Toprak would push all the way to the line but Jonathan ran out the winner by a slim 0.381s.

This weekends results have moved Jonathan to within 16 points of the championship lead as we move to the United Kingdom for round eight at Donington Park between July 5thand 7th.

Jonathan Rea, stated: “Winning two races at Misano was good for us, especially the two important races. Unfortunately in the Superpole Race today I made a big mistake in turn ten, when I lost the front. But I restarted to finish fifth which was all important for the weekend. Race Two today was a tough one because the temperature was hot. I was very unsure of the pace. I felt like it was slow but I did not want to push any faster. I saw Alvaro go down very early in the race and the conditions out there were very tough, especially for the front tyre. The rear was just not digging in and going forward, it was just spinning so much – but we won, which was the main thing. It was a super-nice day for Kawasaki because we put three bikes on the Race Two podium. Team Suzuka! Donington next and we will go to every track with an open mentality.”