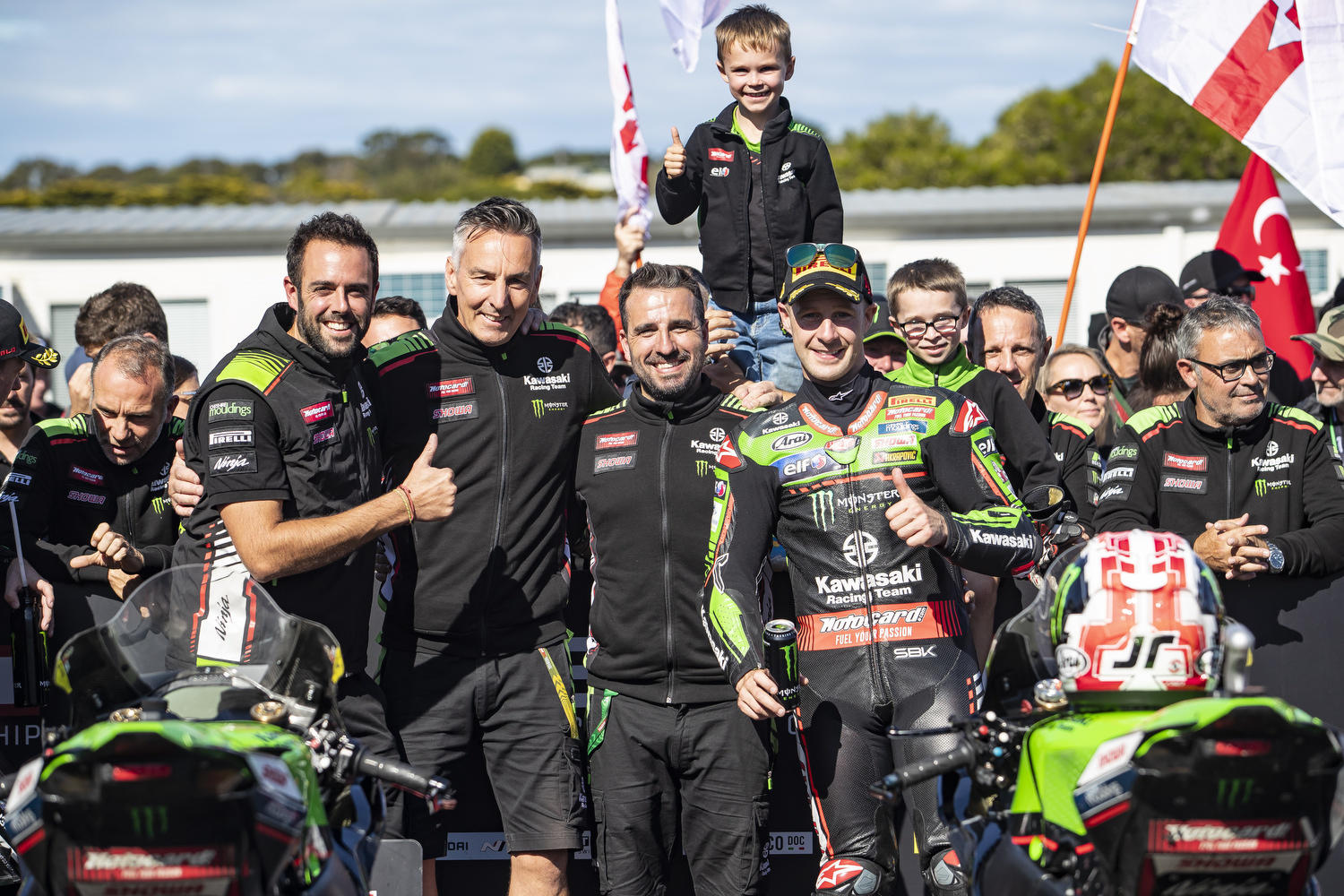 Jonathan Rea won the first WorldSBK race of the weekend at Phillip Island today in one of the most dramatic and intriguing races of the season so far.

After a dry opening day of practice on Friday showers of heavy rain crossed the island on the southern coast of Australia throughout Saturday morning.

Free Practice 3 was held in wet conditions but the changeable weather meant the Superpole qualifying session was held in the dry. Rea qualified in second place.

It rained again before WorldSBK race one and it was declared a ‘Wet Race’.  However, as the riders lined up on the grid the rain cleared and the sun came out. All riders except one opted for full rain tyre options but in the sun and with a steady sea breeze the track began to dry out quickly.

Jonathan led the race briefly in the opening laps but dropped back to fourth as the track dried out. As the race approached the half way distance one-by-one the competitors were forced to enter pitlane to fit slick tyres.

Jonathan benefitted most from his pitstop strategy, coming back into the race ahead of the leading riders once they had all changed their tyres. Having not won a race since May Rea took full advantage of his latest opportunity and after an early scare on a damp section of asphalt with fresh slick tyres, he rode with a cool head and a fast pace to take the chequered flag, six seconds ahead of Toprak Razgatlioglu. Rea’s KRT team-mate Alex Lowes, who had led the race in early stages as well, finished third.

The final races of a hard-fought 2022 FIM Superbike World Championship season will take place tomorrow, Sunday 20 November, with the ten-lap Tissot-Superpole race at 13:00 (GMT +11), and a full distance Race Two at 16:00.

Jonathan Rea, stated: “We knew to expect anything today so we had a plan to cover all bases, and then it was about me being calm on the bike and not making silly decisions. In the wet I didn’t feel like my normal self at the beginning. I was able to pass Toprak on the brakes into Turn One and I was just able to haul it up, but I ended up doing a bit of grass tracking. I managed to catch the leaders and then said to myself to ride slowly, as the track was going to dry out and I did not want to waste my tyres. Alex came through with a really good pace and at that point I said, ‘OK, roll the dice and let’s go to the pits.’ I didn’t think it was a risky move, but I probably could have gone in a lap earlier than I did. I gave a signal to my team going down the straight and then committed to come into pitlane. After we rejoined I was just riding to my pitboard. This was a real team win today. I think we completely nailed the pitstop and didn’t lose one second. Big kudos to the team because they did the work really smoothly and they are as much part of that win as me.”