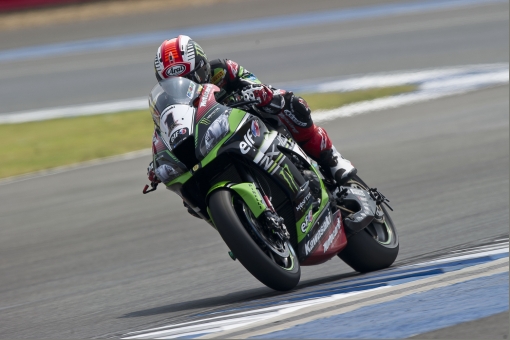 The 2016 FIM Superbike World Championship returns to European shores this weekend with Round 3 taking place at Motorland Aragon, close to the town of Alcaniz in Spain.  Jonathan Rea and the Kawasaki Racing Team hope to continue the current run of excellent results with the latest model Ninja ZX-10R machine.

Following the opening rounds in Australia and Thailand, Rea comes to Aragon with a 29 point lead in the Championship after three wins and a second place finish.  Kawasaki team-mate Tom Sykes sits in second place with 66 points having won in Thailand last time out.

The KRT squad are no strangers to Motorland Aragon.  With it being so close to their base in Granollers near Barcelona it is a favoured test track for the team and both Rea and Sykes completed a substantial number of laps in winter preparing the new Ninja ZX-10R for the season ahead.

Racing with Kawasaki has also seen an upturn in Rea’s fortunes at the circuit.  Up until last year he had only scored one podium finish, in 2014.  In his debut season with KRT he won the first race and came second in race two at the undulating 5.077km circuit.  With the knowledge gained from last years races and the preparations made over winter, Rea is relishing the prospect of racing this weekend and hopes that the rich vein of form with Kawasaki continues.

This weekend will also see the introduction of a new race schedule for the WorldSBK Championship.  The previous two rounds have introduced the Saturday race format but this event will see a regular timetable for races being established for all European rounds.

Jonathan Rea stated: “After the positive start to the season we have had I am really excited to go to Motorland Aragon. We had a great test there in November of last year, with the new bike, and it showed it had a lot of potential. It will be really nice to go back to Europe and have the whole infrastructure around us.  Motorland is a circuit that always produces good close races and some of our rivals are strong there.  I remember last year we learned a lot from race two and we took a really good direction after our post-race debrief.  Hopefully, we can put all we have learned from our previous experiences to good use and have a trouble free Friday. The first day on track has proved to be critical for set-up in the opening two race weekends of the year. It should be a good weekend at Motorland and it should play to the strengths of our bike.”