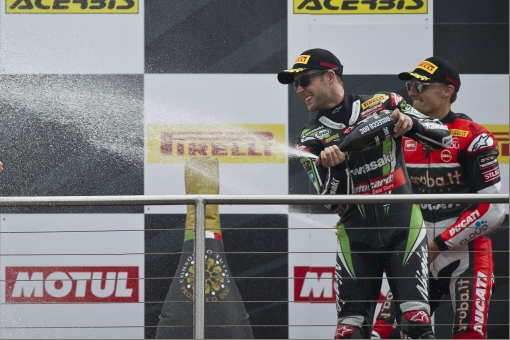 After the official Kawasaki riders shot into an early lead - Sykes from pole and Rea from the second row - there were only two riders competing for the win and each was on the new model Ninja ZX-10R. Rea set a new lap record of 1’27.605 to get himself back into the slipstream of a fleeing Sykes on lap two, as the race settled into a high speed game of cat and mouse between the KRT team-mates.

With a handful of laps to go Rea made a pass on Sykes but in finding a false neutral into Goddards he lost ground that he would never quite make up as Sykes maintained a high and consistent pace right to the end. Feeling the effects of arm pump close to the end of the intense 23-lap race Rea eased up in the final few laps, with third place finisher Chaz Davies safely behind him.

With a 100% record of podium finishes Jonathan now has 293 points in the 2016 Championship standings with Sykes now second on 237.

In the Manufacturers’ Standings Kawasaki has a commanding 53-point lead thanks to the exploits of the new model Ninja ZX-10R and the official KRT pairing of Rea and Sykes. The next round of the championship will take place at Misano, between 17 and 19 June.

Jonathan Rea stated: “I got another neutral going into the final hairpin corner, just as I had made my pass, so I was a little bit frustrated with that. In the end of the race I did not have much for Tom. I feel my bike was working really good, so I want to thank my team, especially as we have been working close with Kawasaki and all the crew to get the bike suited to me. It seems we are getting there now. In the last few races we have defined the engine character that I really like, so now it is the balance of the bike that seems to be working. To be so close to Tom, in a circuit that he is so strong at, is good because he is riding really strongly now. I am happy for that and happy to come here and make a big margin in my championship lead as well. That is the priority - but it would have been really nice to cap it off with a win in race two. My bike was feeling really good but near the end I just suffered a little bit with arm pump in my right arm.”