Second Place For Rea In Race One At Sepang 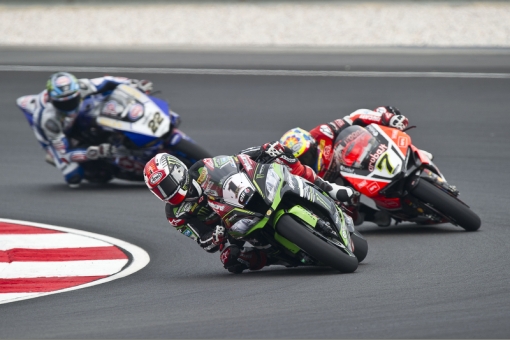 Jonathan Rea took a comfortable second place in the first race of the FIM World Superbike Championship weekend at Sepang Internatiional Circuit in Malaysia.  The race was won by Rea’s Kawasaki team-mate, Tom Sykes, making it a 1-2 for the Ninja ZX-10R.  Chaz Davies (Ducati) was third.

Rea achieved his main goal of the day in the first of the weekend’s two 16 lap races, extending his championship lead over second ranked rider Chaz Davies. In keeping Davies in third place today Jonathan now has a 39 point lead to take into race two on Sunday. Rea had finished Superpole in third position, for a front row start.

The second Sepang race will take place at 16.00, local time in Malaysia, on Sunday 15 May.

Jonathan Rea stated: “I was probably a little bit too conservative in the beginning because I was waiting for that crossover point, which never happened, so I could afford to be a bit more aggressive in the first laps. I think that looking at everyone’s front tyres in parc ferme that appears to be more of the limitation compared to the rear. I am happy because we achieved out target today, which was to further extend our championship lead. It was hard here because I had prepared my race in my head and followed the whole strategy right. Tomorrow maybe I can try to take some of the energy out of the front tyre, change the balance a little bit, to not give the front tyre so much of a hard time.”