Second For Rea And 500 Podiums For Kawasaki 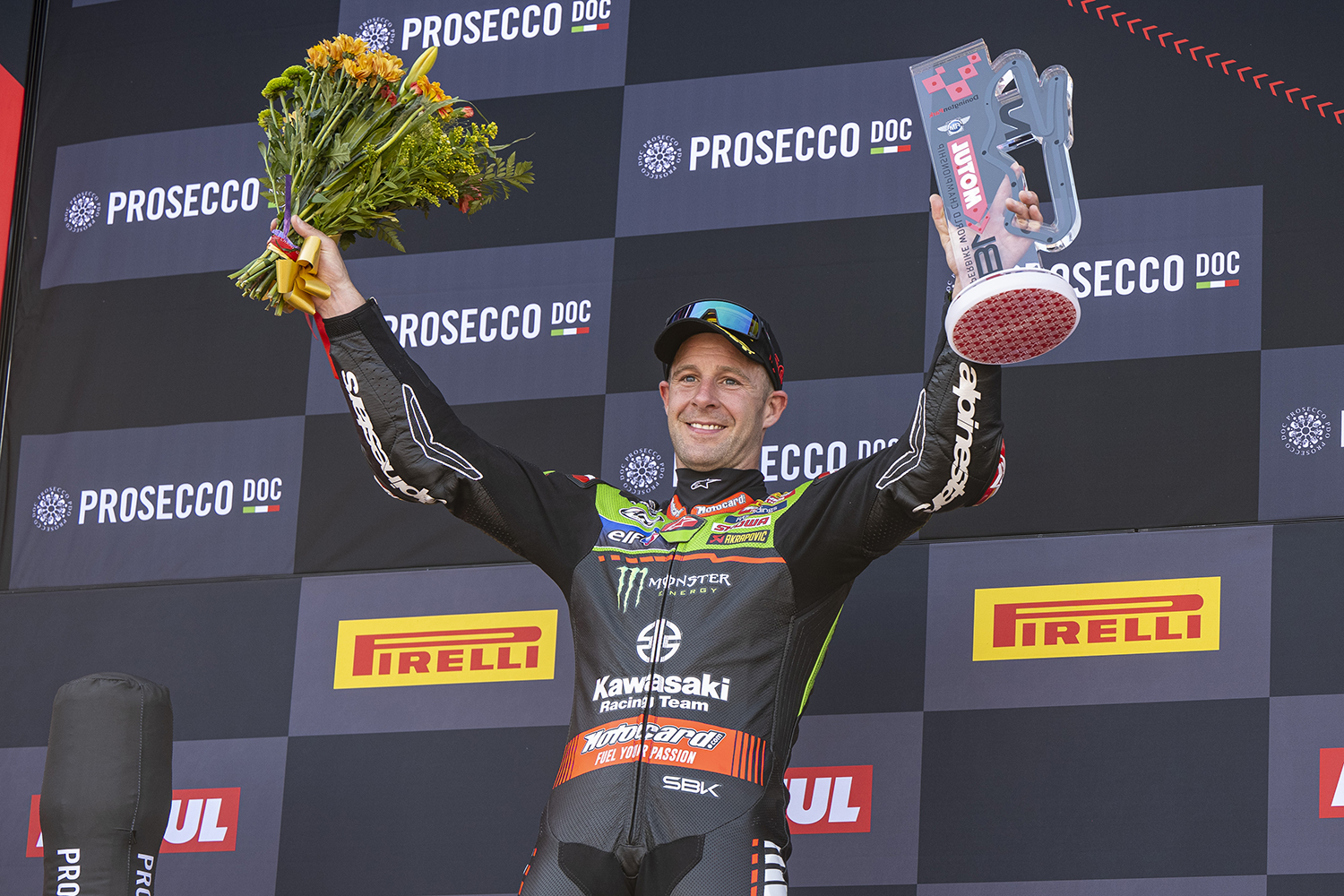 Jonathan Rea finished second in WorldSBK race one at Donington Park today after a dramatic 23-lap race which he started from pole position. Kawasaki Racing team-mate Alex Lowes was third and the pair were able to celebrated Kawasaki’s 500th podium finish in the World Superbike class.

In Superpole qualifying Rea took a new lap record of 1’26.080 to secure his second pole position of the year.

A dramatic start to Race One saw Rea run wide on the approach to the Foggy Esses while battling with eventual race winner Toprak Razgatlioglu (Yamaha), and lose places as a result. He would end up in sixth place soon after this point and have to make committed passes to get back into podium contention.

During an intense battle with championship leader Alvaro Bautista (Ducati), Rea would pass and re-pass his rival until Rea ran wide and went into third place.

With nine laps to go Bautista fell at Goddards Hairpin. He remounted but was unable to finish the race. Rea was once again in second place but too far behind the leading rider challenge for the race win.

In securing this important race result for his 2022 championship ambitions Rea also took the all-time tally of Kawasaki WorldSBK podiums to 500, which the team celebrated in parc ferme with special pitboard logos.

Track temperatures got well over 40°C today and even hotter weather is predicted for the final day of competition at Donington that will see the ten-lap Superpole race at 11:00, and Race Two, scheduled for 14.00 local time.

Jonathan Rea, stated: “The Superpole lap was incredible. I got so close to a 1’25 lap that - as much as I was happy and convinced that it was going to be pole position - I was a little bit gutted that I didn’t get a 1’25.9. Nicer than anything is the crowd today. I saw so many people around the track on my sighting lap. That is so nice to see and thanks to all the fans for coming out. In the beginning of the race it was a little bit of a mess, to be honest, for the first few laps. I tried to get track position as fast as I could. I really trusted myself to go to the front. I didn’t see that Toprak would have that kind of rhythm. If I were to do that race again I would have just focused on staying behind him, letting him do the leading job. I compromised myself going into the chicane, and in the first lap I lost track position. Then I was fighting. When I did get track position I had Alvaro dive-bombing me every time, at the end of the back straight into the chicane, or on the brakes into the Melbourne Loop. I felt like, on my own, I could be OK. Then when Alvaro went down Toprak had much better rhythm and I had nothing left. I really struggled at the end with the rear. But to get 500 Kawasaki podiums is really nice. I know I contributed to a large quantity of them but it is something to be really proud of as a manufacturer to have 500 WorldSBK podiums, especially in today’s era when all the manufacturers are competitive.”